Let’s face it, with the squalls of the last few days, autumn is definitely upon us!   And with that, it’s time to pull back on our stocks of the pink stuff.  Don’t fret though, we’ll always have our delicious rosé wines throughout the year, we just manage our stocks a little closer.  It is a simple fact that rosé is enjoyed best when the sun is beating down on us and not when its blowing a hoolie outside!

One rosé that we have always enjoyed hails from an unusual origin – Morocc0 – and is made at Domaine de la Zouina, near Meknes.  The wine is called Volubilia, named after the ancient city of Volubilis, 30km north of Meknes.  Wanting to know a little more about the origins of the name, I discovered that Volubilia (Volubilis) translates from Latin as rolling, or revolving, or in constant movement.  Indeed, how many of us ever stopped to think about the origins of the famous Volvo car manufacturer?  It translates to ‘I am rolling’. 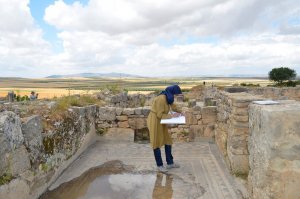 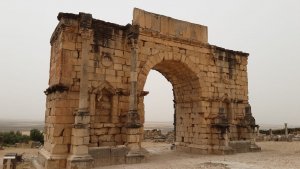 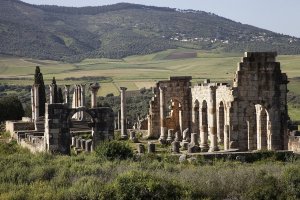 The city of Volubilis was founded in the 2nd century and thrived under Roman rule in its early years thanks to an extensive olive industry (grape vines came a little later).  Wealth was plentiful and with it brought fine architecture and extensive mosaics. The uncovering of the site is in part thanks to a collaboration of the Getty Conservation Institute with local archeologists and is considered to be one of the best-preserved Roman ruins in Morocco.  Now an established UNESCO world heritage site, it’s definitely worth a visit.

As for the wine, Volubilia is available throughout the year – deliciously pale and dry, it makes for a great glass of wine at the end of the working day!