It’s true to say that Indian viticulture has historically had its ups and downs and with it the quality of the wine.  But these days, the winemaking expertise is worthy of mention and we’re as proud to bang the Indian drum as any other wine producing nation. 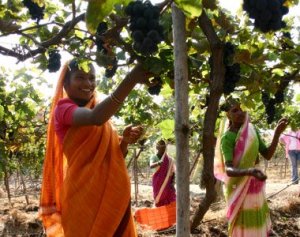 Indeed India has a pretty long history of grape growing.  Historical evidence suggests vines were introduced from Persia (more recently known as Iran).  During the British and Portuguese colonial years, winemaking flourished, only to be scuppered by the pesky phylloxera louse which, as we know, took its toll across much of the winemaking world.

Indian vineyards took time to recover from phylloxera but did begin to thrive once more in the early 1900s.  Frustratingly for the grape farmers, religious and public opinion then started a campaign towards alcohol prohibition.  This was fueled by independence from the British Empire and many states eventually banned alcohol altogether.   The farmers had no choice but to convert to table grape production at this time and winemaking disastrously went out the window.

During the late 20th century, winemaking pretty much exploded in India – a boom in the economy and the rising yuppy-ism suggested that huge domestic demand was just around the corner.  In fact, the boom lasted well over a decade, giving aspiring young winemakers plenty of time to prove that it really is possible to produce impressive, world-class wines.

Tragically, many wineries were hit by world recession, leaving them strapped for cash.  They struggled to successfully promote their wines, finding the world market somewhat saturated, ignorant and with little or no appetite to provide space for an Indian wine category.  Many simply didn’t have deep enough pockets (or maybe the desire) to spend on extravagant advertising.   As such, the turn of the 21st century witnessed many estates close their doors, grub up their vines and replace with alternative, more profitable vegetable crops.

The good news is that the few wineries that survived are thriving, producing the quality and quantity suitable for export, all the while encouraging a massive uptake in local wine tourism.  Sula Vineyards alone see literally thousands of tourists flooding through their cellars every weekend as Indians up and down the country relish the intrigue and excitement of experiencing wine for the first time.

We’re shining a spotlight on Dindori Shiraz this spring – find out more here.